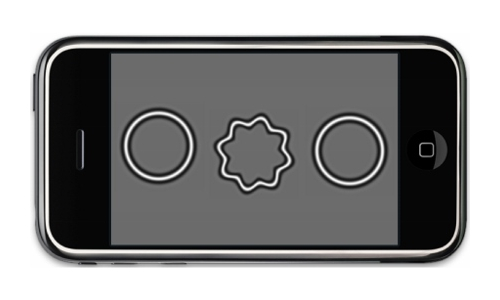 You can use your iPhone to play games, find restaurants, even friends. Now, some people in North Texas are using their iPhones to prevent blindness.

There’s a tiny part of your retina – that’s the tissue in the back of the eye – called the macula. It’s what makes it possible for you see details and do things like thread a needle, read small print and street signs. Diseases, like diabetic retinopathy and age-related macular degeneration (AMD), damage the macula and can cause blindness.

For over a decade, Dr. Yi-Zhong Wang has been trying to come up with a way to help people struggling with these diseases. He’s a research scientist at the Retina Foundation of the Southwest in Dallas.

Wang explains that both AMD and diabetic retinopathy can result in leakage of blood and swelling in the eye.

“If you detect it, get treated, the swelling goes down and the patient will recover, to a certain degree,” Wang says, “but if you let the swelling sit for a couple of months the damage is irreversible.”

There’s no cure for AMD, but doctors can prevent it from getting worse by injecting a medicine in the eye as soon as the disease acts up.

Catching any damage to the retina early is key, so weekly, even daily monitoring is ideal. Problem is, patients often miss check-ups.

Mike Bartlett, president of a Richardson biotech firm called Vital Arts Science, explains that for the people most commonly affected by retina diseases – the elderly – monitoring slight changes in vision is no easy task.

“But it’s really important for them to monitor,” Bartlett says, “Because if they delay, the treatment when they do get it is not effective.”

Bartlett, who has worked on developing medical devices with Texas Instruments, teamed up with Dr. Wang to develop a vision test that patients could use anywhere – on the couch or in the kitchen – accurate enough for doctors to trust.

The result: MyVisionTrack, the first FDA approved eye disease test you can use on an iPhone.

At the Retina Foundation of the Southwest, Daniel Agnew of Frisco is using the MyVisionTrack app on the iPad for the first time. Agnew has diabetic retinopathy – a leading cause of blindness in American adults. Right now, his vision is still pretty good, but he knows he has to start tracking it early.

With a yellow and black eye patch covering his left eye, Agnew is staring at three circles on a screen. In what looks like a game, he has to identify and tap the circle that isn’t perfectly round. With each click, it gets harder to tell which circle is distorted.

This test is nothing like the standard Snellen Chart, where you try and decipher those tiny letters. That test doesn’t detect problems in the retina, but the iPhone test can. Whereas with most eye tests, it is important to stand an exact distance from the chart, the iPhone “shape discrimination” test isn’t affected by changes in lighting or distance.

“It is much more accurate at testing what we’re trying to get at,” Bartlett says, “diseases like age-related macular degeneration and diabetic retinopathy.”

And, it’s portable. Results are stored and sent to the doctor, so patients don’t have to keep track of how they did the earlier in the week or even that year. Right now MyVisionTrack is by prescription only, but Bartlett hopes to have the app available in the iTunes store soon. And while it’s not as fun as Angry Birds, it just might save your sight. 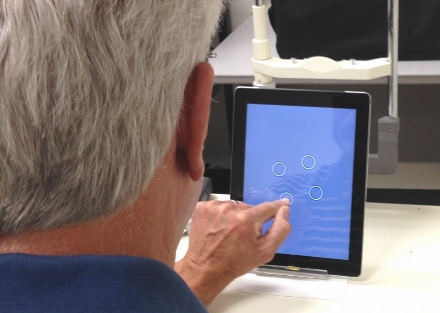 The MyVisionTrack test on the iPhone showing three circles, with one distorted.

The user has to identify and tap the circle that isn’t perfectly round, and with each click, differentiating becomes more difficult.

*This story was originally published by KERA News.