The Argus II Retinal Prosthesis system uses a tiny camera mounted on what looks like sunglasses, which sends a wireless signal to electrodes implanted on the retina.

DALLAS — Relying on a guide to walk down a hallway is just the beginning of Bonnie Harper’s daily challenges with blindness.

“Just losing that freedom and doing things on my own was kind of frustrating,” admits the 71-year-old.

A genetic eye disease called retinitis pigmentosa has been slowly robbing Harper of his sight since he was a child. The world went completely dark about a decade ago.

But high-tech glasses and an implant placed on his eye are helping Harper see the light, once again.

The Argus II Retinal Prosthesis System uses a tiny camera mounted on what looks like sunglasses. A wireless signal from the glasses is transmitted to electrodes surgically implanted on the retina. Those electrodes then stimulate the optic nerves, sending messages to the brain.

“We think that it’s crucial that they have the memory of what objects look like,” explains David Birch, Phd. And chief scientific officer at the Retina Foundation of the Southwest in Dallas. “So that they can begin to connect the patterns that they see through the glasses with the objects they remember.”

Birch helped conduct years of research on the system. It was FDA approved last year, but is now available to the general public. The Retina Foundation in Dallas is among the first to offer it to patients.

Patients, such as Bonnie Harper, must be trained on how to interpret the signals, which appear like flashes of light.

“Our job is to teach them how to make sense out of the flashes they are getting,” says Birch, “So after a while they begin to recognize doorways as a particular pattern of flashes. They can see people. They can tell people are moving.”

Bonnie Harper says right now, he holds a rope from his front door to the mailbox.

“I want to be able to see that mailbox without having to hold onto that line, and I believe these will get me to that point, eventually,” Harper said.

The system does not completely restore eyesight, nor can patients see colors.

Right now, the Second Sight technology can only be used for retinitis pigmentosa. It costs about $140,000. Insurance companies are expected to cover at least some of those costs.

Bonnie Harper hopes that what he’s learning, and teaching researchers following his progress, will help others struggling with blindness.

And perhaps, with the glasses, Harper may even walk down a hallway, independent of a guide. 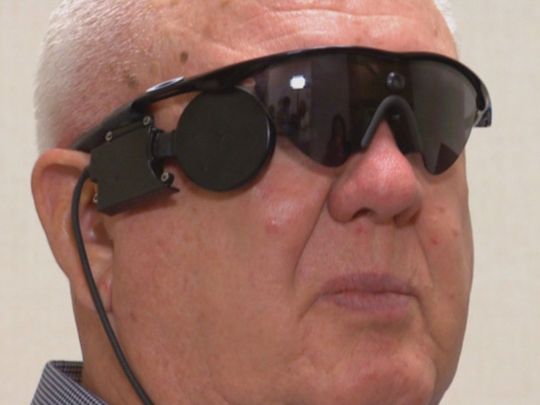