What Does “Blindness” Really Mean?

Jenny Schisler has retinitis pigmentosa. Jenny wants to spread awareness of what having a visual impairment really means to her and others affected by retinal degenerative diseases.

There was recently a viral image of a visually impaired woman using a cane and looking at her phone. In ignorance, the typical person would say she is “faking” her need for a cane. Thousands of people took the time to ridicule this woman.

Mobility can become difficult and dangerous with certain eye diseases. However, with a retinal degenerative condition like retinitis pigmentosa (RP), you might still be able to read. If you could imagine losing all of your peripheral vision to a condition like RP and looking through a paper towel tube (or even a straw in advanced cases) to get yourself around on a busy sidewalk (where the lady in the viral image was walking), you might reconsider your perspective on her situation. She may have a remnant of central vision to see her phone or use an app to help her find her destination, but not be able to safely get there without being able to see anything outside of the restricted tunnel she’s looking through.

I have RP and it causes blindness over time. Most people think you are completely blind if you are visually impaired, or that you are a “normal,” completely sighted person. The truth is that there are so many people who are somewhere in between.

People in the US are considered “legally blind,” if they have visual acuity of 20/200 or less and/or a visual field of 20 degrees or less. Before I began to learn about the broad spectrum of visual impairment, I thought people who were “legally blind” were completely blind. A legally blind person can see, just not very well.

I recently spent a day at the Retina Foundation of the Southwest in Dallas. I have a wonderful doctor, David Birch, and I’m grateful for the team who took care of me there. My first test of the day determined I have 20/20 visual acuity in both of my eyes. That’s because I have 70 percent of my cone function. Cones are the photoreceptors, the light sensitive cells in the retina, that provide central and color vision, and the ability to read and recognize faces.

“Most people think you are completely blind if you are visually impaired, or that you are a ‘normal,’ completely sighted person. The truth is that there are so many people who are somewhere in between.”
-Jenny Schisler

My second test was an advanced visual field exam, and it was like a video game with flying dots and a button I pushed. I learned that have about 40 to 50 degrees of visual field, or peripheral vision, remaining in each eye. Most people have around 180 degrees of peripheral vision. However, 40 to 50 degrees looking out 100 yards is quite a bit of vision. I work hard to scan and piece together the places I can’t see. But when you get very close to me and reach out to shake my hand, sneak up on my periphery, or ask me to grab something small in a place right in front of me, I may not see it at all.

I have around 10 percent of rod function left in each of my eyes. Rods are photoreceptors that provide peripheral vision and vision in dark settings. As someone with RP loses rod photoreceptor cells, we lose our peripheral vision and our eyesight “tunnels in.” I have a blind spot at the top of my visual field. I would describe it as the area where the bill of your baseball cap goes, and directly above it. I don’t use this vision as much as my side and bottom periphery, but I can definitely hit my head on cabinets that are left open!

I also have a blind spot, known as a scotoma, just outside my central region of vision. Again, I move my eyes a lot to make up for the loss I have. I do not see a “black spot” here. I would describe the area as a blurry haze with the colors of the missing pieces mixed into the background.

My particular gene mutation is considered mild in the various mutations that present as RP according to Dr. Birch, but the slow, steady decline that comes with RP will continue for me. Some people with RP have more aggressive forms that cause serious visual impairment in their teen years or even at birth.

If you meet or come into contact with someone who is visually impaired, I hope you will keep in mind that blindness is not an easy thing to define. Every person is different. If you would like to know what someone does or doesn’t see, especially if you are trying to help them, I suggest politely asking them. If you happened to ask me, I would be more than happy to tell you. 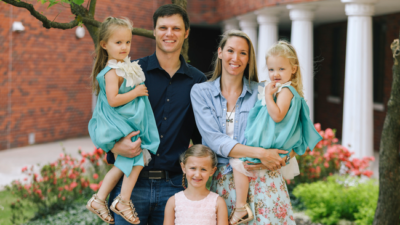