(Dallas, TX- July 2015) – After the release of promising results from the StemCells, Inc. Phase I/II clinical trial on the safety and efficacy of their proprietary human neural stem cells for the treatment of dry age-related macular degeneration, the Retina Foundation of the Southwest will participate in the expansion of the study as one of potentially 20 sites nationwide.

The Retina Foundation has been partnering with StemCells, Inc. in a Phase I/II clinical trial using HuCNS-SC® human neural stem cells to treat dry age-related macular degeneration (AMD). On July 26, 2015, StemCells, Inc. released a summary of the safety and preliminary effectiveness from the trial as potential therapy for geographic atrophy (GA), the most advanced form of AMD. The safety results and a trend in improvement in patients’ visual function allow the trial to proceed into the Phase II assessment and expansion to include additional sites and participants.

The press release from StemCells, Inc. states that in the Phase I/II study, the visual acuity and contrast sensitivity for the majority of the patients either improved or remained stable in the treated eye. Also, the analysis of both groups of patients showed that the GA growth rates in the study eye were lower than those in the control eye. These results are consistent with the interim results for cohort I.

The trial originally enrolled patients at three centers, and Dr. David Birch, Chief Scientific & Executive Officer and Director of our Rose-Silverthorne Retinal Degenerations Laboratory, is leading the trial at the Retina Foundation of the Southwest. Dr. Stephen Huhn, Vice President of Clinical Research and Chief Medical Officer of StemCells, Inc. states, “the first active site is enrolling and we plan to have approximately twenty U.S. sites eventually participating in the study.”

The next step of the clinical trial, the Phase II Radiant Study, is designed to formally compare the outcomes of the stem cell implants between the transplanted and non-transplanted eye in each patient. This trial will seek to substantiate that the treatment helps to slow the progression of GA in patients with advanced macular degeneration.

Dr. Birch shared his thoughts on the trial expansion: “I am extremely gratified that AMD stem cell treatment will move on to the next phase based on the results we have obtained in our patients at the Retina Foundation.  We are in the early days of stem cell therapy for degenerative diseases, but the future holds enormous promise.” 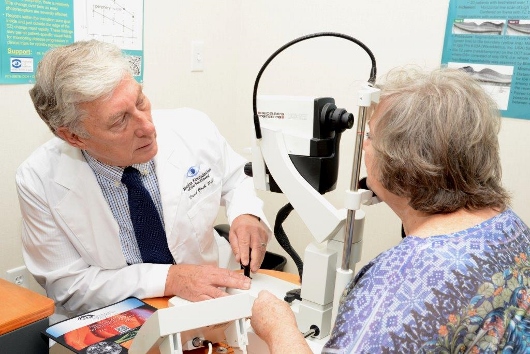