Stargardt disease is the most common form of inherited juvenile macular degeneration. Stargardt disease begins in late childhood and may in some cases lead to legal blindness. It affects approximately ten in 10,000 children and adults. There is currently no treatment for Stargardt disease.

Over the past few years, the Retina Foundation of the Southwest participated in two studies for Stargardt disease on the natural history of the progression of the degeneration of cells. One study was retrospective, looking back at data on disease progression that we have collected in the past. A second international study (ProgStar), funded by the Foundation Fighting Blindness, was prospective. We followed patients at six month intervals over the course of 24 months.

The success of the prospective study helped inspire a new international clinical treatment trial for Stargardt disease, sponsored by Ophthotech, a biopharmaceutical company. The Retina Foundation of the Southwest began participating in this new trial in January 2018, alongside 13 other sites in the United States and another 24 sites in different countries. The trial will recruit and follow 120 individuals with Stargardt disease over the course of 18 months.

In January 2018, the Retina Foundation of the Southwest was the first site worldwide to enroll a patient with Stargardt disease caused by mutations in the gene ABCA4 into the trial. We are actively enrolling qualified participants who agree to complete the trial with a total of 23 visits. It is our hope, and the hope of the individuals participating in this project, that the drug being used in this study will be proven effective in slowing down or halting the progression of Stargardt disease. 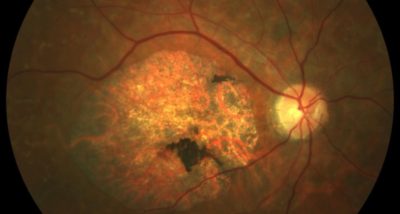