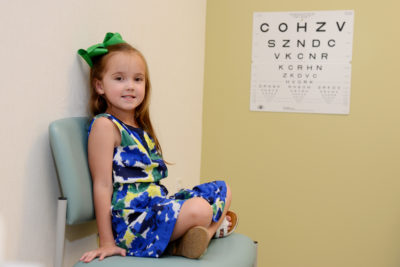 Chance Encounter Leads to Early Diagnosis and Treatment for Kate

It was a chance encounter that Kate received treatment for her lazy eye at an early age. Her mother, Tori, is a mother of three and on a routine visit to the pediatrician she was presented with the opportunity to have her one-year old son enrolled in a nutrition and vision study at the Retina Foundation of the Southwest.

Tori explained that she travels in a “come one, come all” type of fashion and like many moms, she hardly ever goes anywhere with one without the others. Little did she know that the appointment for her son would lead to a critical discovery for Kate who struggled to see with her left eye.

“We were actually here for one of his appointments when they mentioned a screening study for older children, so since we had my other two girls here, we went ahead and did the screenings and that’s when I found out that Kate had one eye that was significantly weaker than the other.”

It was then that they visited a pediatric ophthalmologist who confirmed the diagnosis and Kate began patching treatments and prescription glasses to correct her vision. “Lazy eye” (amblyopia) and “crossed eyes” (strabismus) are two conditions that combined, are the leading causes of preventable vision loss. However, if detected during the preschool years, treatment is effective in preventing permanent vision loss for most children. Currently, these two conditions are diagnosed by risk factors, but now the Retina Foundation has established a superior screening method that is highly accurate in diagnosing children and also helps to prevent misdiagnosis.

“You all saved us time in correcting her vision because it may not have been caught until she was in the first grade,” said Tori. “The Retina Foundation was a great resource that at the time we didn’t know existed. Once we found out about it, it really made a huge difference in early diagnosis for Kate.”