Achromatopsia is a rare inherited eye disease characterized by decreased vision (20/200), extreme light sensitivity, and the absence of color vision that affects less than 10,000 Americans. There is no current cure for achromatopsia. However, research on gene therapy is ongoing and may lead to treatment options in the future. The Retina Foundation of the Southwest is a leader in this research, in large part due to the generous support of the Edward C. Fogg, III and Lisbeth A. Fogg Charitable Trust.

The Retina Foundation of the Southwest is staffed with a strong team of scientific researchers and furnished with advanced testing equipment. This combination led to the early detection of achromatopsia in 18-month-old Wilson Hunt.

Parents Elizabeth and Taylor Hunt strongly believe “Wilson is doing so well today because of the Retina Foundation’s early detection of this rare disease.” Upon diagnosis the Hunts immediately contacted Early Childhood Intervention (ECI) and found that Wilson qualified for visual and mobility therapy. Weekly therapy and dark, polarized sunglasses have both drastically improved Wilson’s quality of life and allowed him to overcome everyday situations such as walking up and down stairs, surface changes, and following moving objects such as a rolling ball.

To keep Wilson on track academically, the Hunts enrolled him into a special education Pre-Kindergarten program that has helped them understand beneficial ways of learning. Wilson uses a slant board to help with his writing and an iPad to view what other kids see on the classroom projector screen.

Three years have passed since the Retina Foundation shared the results from the electroretinogram (ERG) test with Wilson’s parents. Since his initial diagnosis, Dr. David Birch, Scientific Director of the Retina Foundation, has met with the Hunts on numerous occasions to run more tests and keep the parents up to date on possible gene therapy trials, give advice on glasses that might benefit Wilson, and help the family to understand more about achromatopsia.

The Hunts assure us that Wilson is doing great and set to begin Kindergarten next year. He loves to read books (with large font), write letters, and count numbers. Difficulty with sports, reading normal sized print, and occasional falls due to unforeseen objects are the reality of his daily life, but Wilson has come a long way since he was first diagnosed. Swimming is his favorite activity and this past school year he was even able to play on the Pre-K soccer team!

Recently, Dr. David Birch successfully identified the CNGA3 gene as the source of Wilson’s eye disease. The Hunts are hopeful that Wilson may one day soon be part of a gene therapy trial that will help to activate his cones and contribute to meaningful vision improvement. They are very optimistic that “one day he will be able to see some of the beautiful colors in our world.”

The Retina Foundation has helped thousands of families like the Hunts over the past three decades. This work has been supported by grants from the National Eye Institute, Foundation Fighting Blindness and, more recently, the Fogg Charitable Trust. The Retina Foundation believes that early detection, gene identification, and patient education are essential aspects of our mission to prevent vision loss and restore sight through innovative research and treatment. 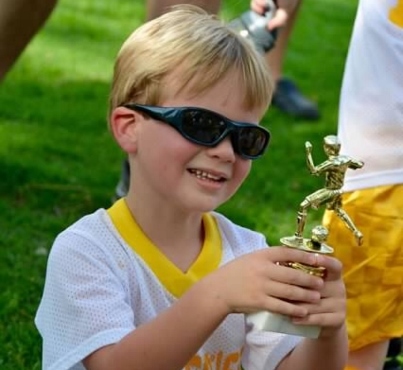