Wendy first noticed Gabriela’s eyes turning before she was one year old. Subsequently, she was diagnosed with strabismus, “crossed eyes,” and amblyopia, “lazy eye,” which resulted in a series of treatments. Her depth perception and spatial relations are still not on the level of the average person. Yet, at the age of 12 years old, it’s safe to say that Gabriela has good vision.

Gabriela has benefited greatly from advancements in treatments for children with developmental eye disorders. The early detection along with modern surgical treatments and vision therapies have all worked together to help give Gabriela the best chance at having a life without significantly struggling with her vision.

“I really don’t think it holds her back. I think it requires her to be more deliberate in her choices, but has she ever not done something that she wanted to do because of her vision, no,” said Wendy, Gabriela’s mother.

Wendy admits that retaining Gabriela’s good vision takes work. “Anything that she does where we can put her in a position of controlling her eye muscles is a good thing. She’s got to maintain the control. She’s got to always be the boss of those muscles.”

Gabriela has visited the Retina Foundation of the Southwest since she was a toddler to help monitor her vision. She has also participated in different studies, including our study that explored the use of specially designed iPad games as a new, alternative approach to patching therapy for lazy eye.

According to Dr. Eileen Birch, Director of the Crystal Charity Ball Pediatric Vision Evaluation Center at the Retina Foundation of the Southwest, “Amblyopia (lazy eye) is caused by suppression of the weaker eye by the stronger eye. For years we thought that this suppression permanently broke the link between the eyes so treatment was focused only on covering the stronger eye with a patch to force the weaker eye to work.  This approach proved partially successful in restoring vision but did not teach the eyes to work together, so residual and recurrent amblyopia was common.  Our new binocular approach to treatment provides direct evidence that we can alleviate suppression of the weaker eye, and not only improve vision, but allow the amblyopic brain to relearn binocular cooperation.”

Currently, the standard treatment for lazy eye is patching, which involves placing a patch over the good eye in order to strengthen the lazy eye. The problem with this approach is that it does not help the two eyes to work together, which would help the child obtain the clear, binocular vision that many of us enjoy.

Because of the work at the Retina Foundation of the Southwest, there is now a nationwide multi-center clinical trial to compare the use of specialized iPad games as an alternative treatment to patching. The data from the Retina Foundation’s previous study demonstrates that the iPad game approach is superior to patching, and that the treatment helps improve visual acuity in children with lazy eye. In addition, the risk of recurrence is greatly reduced.

Wendy recalls that the iPad game play required a firm commitment. However, it was engaging for Gabriela and she enjoyed it. In Gabriela’s case, the treatment did not significantly enhance her vision, but Wendy believes it helped maintain Gabriela’s good vision.

“Anything that she can do with her eyes to make them perform together is a good thing. I think it’s contributed to us having a twelve year old who can do anything that she puts her mind to.”

Gabriela has qualified for the Plano Metropolitan Ballet for the second year in a row and she has been promoted to begin her lessons en pointe. She is an exemplary student and her parents and teachers work closely together to make sure that she has every accommodation that she needs to be successful academically. Wendy admits that Gabriela is probably one of the few children who sees her eye doctor more often than her dentist; and while her vision doesn’t deter her from accomplishing her goals, it is still so much a part of her story. 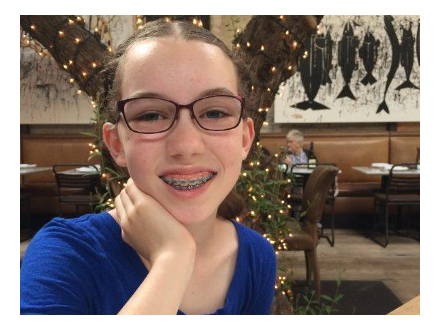