Retina Foundation of the Southwest New Home in Dallas

Since we opened our doors in 1982, the Retina Foundation of the Southwest has been the epicenter of vision research for the southwest region. We have remained steadfast in our mission to advance treatments for vision loss and our accomplishments in research serve as a testament of what we can do, when we work together.

The Retina Foundation is a leader in research on macular degeneration, pediatric eye disorders, and inherited eye diseases, such as retinitis pigmentosa. We serve more than 2,300 children and adults each year completely free of charge.

We have seven premier laboratories and a staff of 23 researchers who collectively publish more than 25 papers for the medical community each year. We have a dedicated Board of 27 volunteers, hundreds of supporters and donors, and thousands more who are depending on our research to develop treatments for their vision loss.

While we continue to exceed expectations with new treatments and technologies, we were also bursting at the seams in our old facility, desperately in need of a larger space to accommodate our seven laboratories and additional patient examination rooms.

At the beginning of 2013, we completed our capital project by acquiring and renovating a new building that is located on the corner of Walnut Hill Lane and Central Expressway. A new facility was critical for the Retina Foundation to accommodate the expansion of our research and to improve our capacity to serve our patients.

We are the only independent vision research center in the southwest and because of the generosity of people like you, the Retina Foundation of the Southwest has a permanent place to call home.

Your gift to our Vision of the Future Capital Campaign will establish a legacy for the Retina Foundation of the Southwest right in the center of Dallas. Our future is bright, and we need you to be a part of the journey.

We have raised $2,866,957 toward our $3.6 million Capital Campaign goal. There are many naming opportunities available.

Vision of the Future Capital Campaign

Dallas Association for the Blind 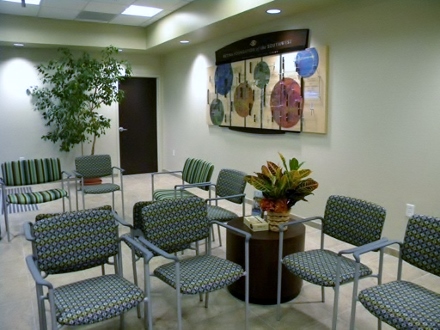